Competing Commitments: What is keeping you from changing?

Change is a mysterious thing. Do you recognise this situation: You want to change something, you know it will bring an enhancement in your work or life, you are perfectly capable to realize the change and still… you seem unable to bring yourself to do it...  What is going on...?

I am sure you recognise plenty of cases as described above, for instance, you want to lose weight, but you keep eating snacks. You want to get that career promotion, but you don’t take real initiative. Now why is it, that despite something being so important to us we fail to deliver – and even worse… we often punish ourselves about it too.

Apparently, somewhere deep down, we carry our own resistance to change, i.e. there are internal barriers that prevent us from making that aspired change. According to psychologists, the reason is that next to our aspired commitments (‘espoused theory’) at some deeper level we carry other commitments that define what really happens (‘theory in use’). These are called competing commitments.

Kegan and Lahey[1] have been instrumental in exploring the paradox of competing commitments. Instead of resistance they the use the word immunity to change, since resistance implies knowingly working against something, which is usually not the case. They explain the competing commitments are not obvious even to the persons who hold them.

So how can we identify our competing commitments? Kegan and Lahey offer a four-step process to explore the competing commitments and identify the assumptions behind them. This will bring us in a better position to deal with the change at hand. Below we provide a high-level summary with an example.

1. State your commitment for change. E.g. As a leader, I am committed to pro-actively give feedback to staff members and contribute to their development.

2. Identify what you are doing/not doing that prevents me from achieving my commitment? I refrain from giving critical feedback when things are not going well, I hold back or belittle compliments when performance is great, I don’t use opportunities for feedback in general.

3. What hidden competing commitment can be identified? I may be committed to: not wanting to embarrass or annoy my staff members, wanting to be liked as a leader, wanting to be perceived as ‘tough’ and not give too much compliments.

4. What implicit (false) assumptions are behind this? If I give critical feedback my staff may not like me anymore, If I give too much praise people may think I am a ‘softie’, I may put my relationships with my staff on the line and may end up standing alone, they may turn against me.

The process to identify competing commitment is not easy. It requires courage and honesty to admit what worries you. Involving others to support you is often helpful. The results of this reflection can often be surprising and give you new insights. Once you better understand your conflicting desires and challenge the implicit (often false!) assumptions that you hold this surely will help you to re-define your true commitment and thus help you to succeed reaching your goal.

Due to space limitations, we can only provide a summary of the process to give you an idea. The full process is more comprehensive and can be applied with real impact at individual or team level. We often organise workshops around the topic of competing commitments. Please contact us if you want to know more or are interested to attend a workshop. 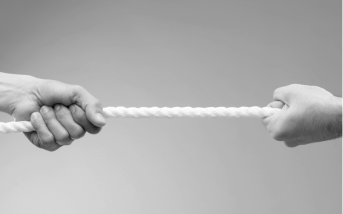